Real estate investments in the UK

The UK has historically been a preferred destination for real estate investors from all over the world and Brexit has made it even more attractive due to the weakening of the pound. A real estate investment in the UK is, now, more than ever, a safe and lucrative option. 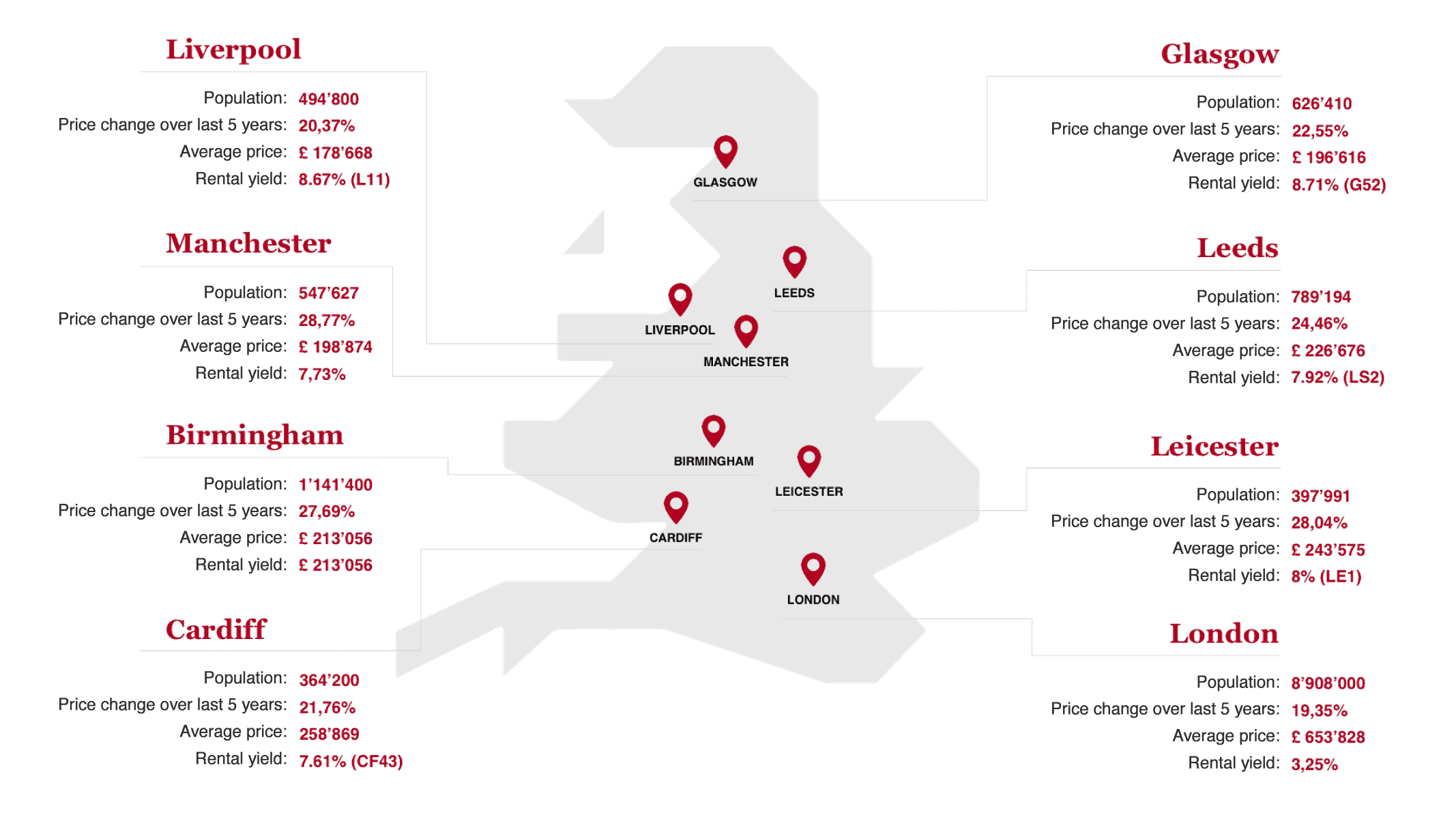 Why invest in Manchester, Liverpool or Leeds real estate?

The most important factor to be considered is the relationship between supply and demand. This indicator is directly influenced by demographic changes. Unlike in other advanced economies such as Italy or Japan, the British population is in fact expanding.  According to the Office of National Statistics in London, the mid-2018 census recorded a population of 66 million and estimates this will exceed 73 million in 2041. Other social dynamics like divorces, increased number of singles, immigration and young people who cannot afford to buy a house further highlight how the demand for rented properties will steadily increase over the coming years.

An imbalance between supply and demand

Another very important aspect is that the supply of UK housing is no longer sufficient to meet growth in demand. This is a 30 year old trend which is getting worse. If in 2018 the historic record of 200,000 new buildings was reached, this figure is still far from the 300,000 annual units that the market requires. Should this trend continue, the housing deficit could exceed 1 million units over the next 10 years which would undoubtedly lead to a rise in the value of existing properties. With a population density of 402 people per square kilometer, Great Britain
is four times more populated than France and over the next 20 years it will be twice as populated as Germany.

402 PEOPLE PER SQUARE KM IN THE UK

In Britain, demand for rental properties has been historically low. However, the trend in recent years shows that the increase in the number of single people is linked to an increase in demand for rental accommodation.
The percentage of the population living in rented accommodation has risen from 10% in 1996 to 20% in 2017. This means that for an investor, it is currently the easiest it has ever been to find suitable and reliable tenants.

20% OF THE POPULATION IS LIVING IN RENTED ACCOMMODATION

One of the most important aspects of a sustainable real estate investment is a positive cash flow. And as far as Great Britain is concerned, we must focus on the relationship between supply and demand. The net return on a cash flowing property is among the highest in Europe. This makes it possible to drastically reduce the volatility of investment performance. It should also be kept in mind that despite the chaos of Brexit, which, on the other hand, provided ‘benefits’, as they were called, in terms of weakening the local currency; the United Kingdom remains the fifth largest economy in the world and the political and regulatory environment is characterised by a security and stability typical of developed countries.

Europe’s Ageing Population (and What That Means for Investors)